NEXT: DIY Experiments: Flavor and the Retronasal Pathway Copy

Although we’re fans of drinking rosé in any season, it’s especially popular in the spring. And when you think of rosé, you may first think of the Provence region in France, which is world-famous for its pink wine. But there are as many styles of rosé as there are red and white wines. No two rosés are the same, which means there’s definitely one out there to suit your palate! So here are the styles of rosé we’re drinking now (from left to right in the following photo): 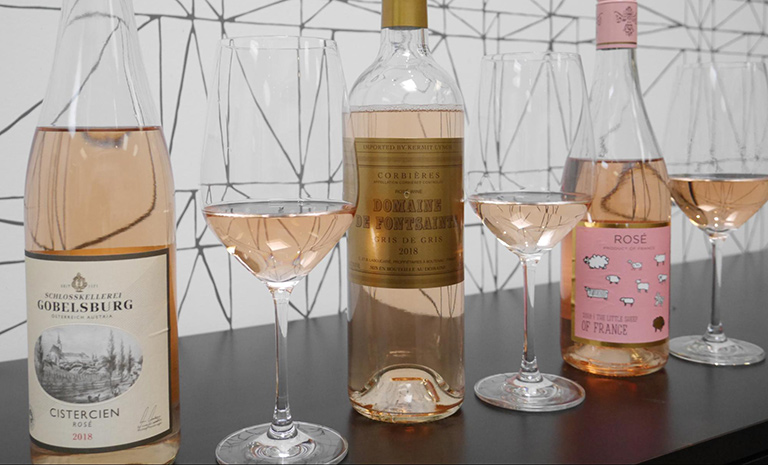 For those of you who dig dry wines, particularly those from Provence, this style might just work for you! This 2018 Schloss Gobelsburg Cistercien Rose is a blend of Zweigelt (a Pinot Noir-like Austrian grape), St. Laurent, and Pinot Noir. Produced in a cool climate, the resulting wine is very aromatic (think wild berries and sour cherries) and has a medium, mineral-like finish. Because it’s bone-dry and high in acid, this wine style pairs particularly well with a variety of food. (We tried it with the Bogus Basin bowl from Paddles Up Poke and it was amazing!) This bottle retails for $16-17, and you can find other Austrian rosés at a similar price point.

Composed of 90 percent Grenache, this rosé style might just be “the one” for red wine lovers. The one we’re drinking is a 2018 Domaine de Fontsainte Corbieres Gris de Gris that retails for around $15 – a great value considering region and quality. Made as a “saignée,” which is a method of rosé wine-making that “bleeds” off a portion of red-wine juice in the early stages of fermentation after its been in contact with its skins and seeds, this rosé is more fruit-forward, softer on the palate, and weightier than its Austrian friend. Although the result is still a dry wine, the saignée method, in general, produces rosés that have a touch more body and alcohol than those produced by different methods. Have this beauty with roasted or grilled poultry, stir-fry, or light salmon dishes.

With a base of Cabernet Franc, this 2018 Little Sheep Rosé is your “I don’t have to think about it” rosé that can be sipped with or without food, on your front porch, at book club, or at your neighbor’s Memorial Day barbeque. Still considered “dry,” it has the most residual sugar of the three wines, which is what makes it so easy-drinking. It’s a “Vin de France,” which means it’s considered a French table wine and is not from a specific region or appellation. Wines with this designation are also likely to be made in a more international, New World style that suits a variety of palates. At $10 a bottle, there really isn’t much to think about except, where’s my wine glass?